At the end of the 1st leg of the Semi-Final I would not have had either of these teams in the cup final. Liverpool were 3-0 down against Barcelona at the Camp Nou. Spurs were 1-0 down after an away goal from Ajax. Both teams had mountains to climb to win their respective semi finals.
After a nail biting finish in Amsterdam with a last gasp winner scored in the dying seconds of the match by Lucas Moura. At half time during the 2nd leg match I was almost certain that Spurs had all but lost their chances of their 1st Champions League final.

Liverpool however were all but out after the 1st leg. Barcelona had Liverpool on the ropes following a 1st leg 3-0 mauling. The 2nd leg at Anfield, Liverpool, had a mountain to climb. Liverpool would have to score 4 goals without conceding a Barcelona away goal. After a nail biting 90 minutes and an outstanding performance by Liverpool their mission was accomplished. Liverpool had achieved one of the greatest come backs in European Cup history.

Liverpool have a prestigious European history with 5 European Cups and 3 UEFA cup wins to their name. Spurs on the other hand have had have struggled somewhat in European competition but have won the Cup Winners Cup 1962-63 & The UEFA Cup in 1971-72 and 1983-84 seasons. This will be Tottenham’s 1st appearance in the Champions League Cup Final.

How did Liverpool & Spurs get to the Final in Madrid? 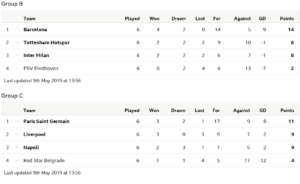 Both Liverpool and Spurs had to scrap their way out of the group stages with less than stellar records and both qualifying as runners up in their groups. With the knockout phase of the competition on the horizon their form in the group stages wasn’t very encouraging. Next up the Knock Out phase of the competition. Both Liverpool & Spurs would have to step up their performances if they wanted to go all the way to the final.

This is how Liverpool and Spur made their way to the final. 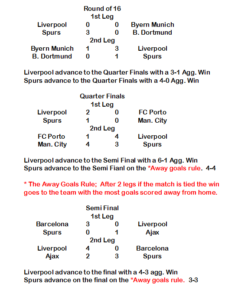 So let’s look at Liverpool’s stats v Spurs of this season how do they compare?

Head to head it is apparent just in the statistics alone that Liverpool have by far the better record. Both in the Premier League & Champions League Liverpool’s goal difference alone is a worrying stat that must have Spurs worried going into the Cup Final on Saturday. Combined in both competitions you can make your own mind up.

In my own humble opinion on paper and stats alone the odds are highly in favor of a Liverpool win.

Who will be the players to watch during this year’s Champions League Cup Final in Madrid, Spain?

Top 5 goal scorers in both teams in all Competitions.

So the players to watch up front are for Liverpool… Mane, Salah & Firmino. For Spurs… Kane Son & Moura. Combined in all competitions they have managed 127 goals, quite impressive.

Head to head in all competitions;

However in the last 14 matches Liverpool have only been defeated once by Spurs.

I know I am throwing a lot of statistics at you and it is quite overwhelming but in a one off Cup Final situation the only statistic that is most important is The Final Score! How many times have I seen one upset after another? Way too many! I am a diehard Liverpool fan on paper Liverpool have all the checks in the right places. I dearly hope Liverpool can put last year’s heat breaking loss behind them and play the way we all know they can. Spurs are no slouches and I anticipate a good competitive match. We will all see Saturday, may the BEST TEAM win.