”A collection by  Michael ’Scouse’ Bromilow and Kenny Alward”

I have been asked on serval occasions about the meaning of a banner that hangs behind the Scouse’s House goal at every Louisville City home match.  I am taking this opportunity to explain in honour of the 29th Anniversary of the Hillsborough Disaster. 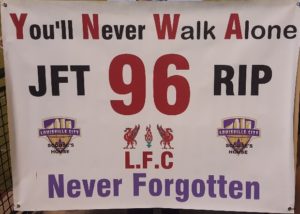 This banner hangs with honour, behind the goal, in front of Scouse’s House. In memory of the 96.

Sunday, April 15th 1989 will mark the 29th anniversary of the Hillsborough Disaster.  At the FA Cup Semi final between Liverpool and Nottingham Forest at 3:06pm, 96 Liverpool fans lost their lives in a senseless tragedy that to this very day has shaped how the fans consume the beautiful game of soccer.  It also changed my life forever.

To undestand the full story, please see the link at the bottom of this article.  But in brief, the Hillsborough Disaster involved thousands of fans trying to squeeze into a confined space and being crushed by the crowd. This disaster could have been prevented by match officials, security, and a better logistical plan for allowing passionate fans to come and go from the stadium safely.  None of those things occurred.  It was a failure of logistics and a failure of logic.

I regard the 96 souls who perished that day as brothers and sisters, many of whom I stood next to, shoulder to shoulder, on the Kop at Anfield for decades.  An additional 766 people were injured during the diaster. many of them seriously, some of them family members, their lives forever altered.

My beloved Liverpool FC would never play a match again on April 15th in respect for and in  memory of the 96. The events of this day will be with me forever and I hope lessons have been learned so disasters like this are never allowed to happen again.

Until last year I had never attended or watched a soccer game on April 15th since that fateful day in 1989.  It is and continues to be a day of sadness and rememberance for all Liverpool supporters around the world.

JFT stands for Justice for the 96.  For many years the families of the 96 have endured a torrent of injustice and falsehoods at the hands of the media and government officials.  Many stories in the media were untrue and fabricated in a misguided effort of victim-shaming.  Many of the Police reports were also altered and/or supressed to deflect blame.  Finally after 27 years the truth is out and the scales of justice have finally tipped in favor of the Families and Victims of the Hillsborough Disaster.

April 15th is a day of sadness and reflection for sports fans of all kinds.  And for my fellow Liverpool supporters it is the day that changed forever how we view the game and our support of the Reds.  It touched me and my brethren in a personal way, and I will keep the 96 in my heart forever.

May the 96 Rest in Peace!  You’ll Never Walk Alone.

For those who don’t know me, I am a native Kentuckian and became a Liverpool supporter in 1998.  In my capacity with the Leadership Team of the Scouse’s House Supporters Group, I am the ”Town Crier & Button Pusher”, which means along with the a lot of help from our LT , I handle marketing, communication, social media and our website.  My wife, Shannon and I were able to visit Liverpool in 2010 and be in the world-famous Kop Stand for a LFC match.  We were moved by the memorials to the 96 that were on display in and around Anfield.  I will do my best to put this in perspective for those who don’t know much of the history and significance of the following tribute and events from an American perspective.

It’s difficult to find parallels to the Hillsborough disaster that happened in 1989 to anything in America even when researching the worst sports tragedies over the last 100 years.  Also, another challenge is that we have been very fortunate in U.S. venues to have only had a few instances of deaths at a sporting event, but nothing close to anything like this.  When this tragedy occurred in 1989, Liverpool were at one of their penultimate heights of popularity and success not only in England, but also in Europe and popularity throughout the world. 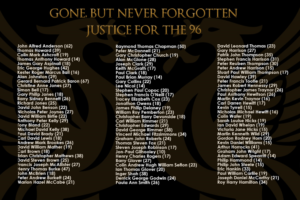 Imagine the most followed sports teams in America, like the Pittsburgh Steelers, the New York Yankees or a few others we can all name and then imagine they are playing a game away from home and 96 of their fans all die in the opposing stadium and it’s blamed on the fans.  Now, do you remember that is the same year that the 49’ers beat the Bengals in the Super Bowl, the A’s beat the Giants in the World Series interrupted by an earthquake, the Pistons beat the Lakers in four games and Sunday Silence won the Ky Derby and the Preakness falling short of the Triple Crown to Easy Goer in the Belmont.  Now think about how long ago that was.

For 27 years, the families who lost their loved ones, in a tragedy of cover up and reporting errors, had to live with an unjust verdict….those victims had been blamed for their own deaths as unruly fans.  The youngest supporter to die was Jon-Paul Gilhooley, who was just 10 years old, who was the younger cousin of Steven Gerrard, who was 8 years old at the time.  As most will know Steven Gerrard went on to play for his hometown Liverpool FC, become a European Cup winner, FA Cup Winner, captain England and became one of the greatest midfielders in English history over the last 25 years.

It took 27 years for these victims to be exhonerated of their own deaths through an incredible show of undying love by their families in a battle that finally was pushed to the British Parliament.  Could you imagine 96 fans dying in a stadium at the 1989 Super Bowl and it taking 27 years to get answers and it had to be taken all the way to the White House to finally allow the victims to be counted as dying innocent?  I can’t imagine that either.  Well, that’s exactly, why you see things like #JFT96, i.e., Justice For The 96.

Just a few weeks ago, we had a number of players, including our own Paco Craig, who is from England as well as Joe Cole from the Tampa Bay Rowdies, formerly of Liverpool FC, Chelsea and an England international player, come over and sign the banner in honor to those who passed as a result of the event.  As we are a global community, you will continue to see the support and honor to those victims with our flag that we humbly fly in Scouse’s House.